The Great Pacific garbage patch is a collection of marine debris in the North Pacific Ocean. And now it’s the size of the entire country of France/State of Texas. While this isn’t the only ocean garbage patch, it’s by far the largest. It’s one of the strongest examples of how waste is destroying the world.

It’s also referred to as the Pacific trash vortex, and it’s actually 2 distinct collections of debris bound together by the North Pacific Subtropical Gyre. The ocean’s currents form the Great Pacific garbage patch, binding together waste from the east and west. Most of the patch’s debris is plastic. And since most plastic isn’t biodegradable, it doesn’t disintegrate. Instead, it just breaks down into smaller pieces called microplastics. But there are also larger plastics, which are mainly refuse from land activities. 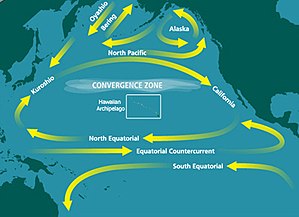 Scientists haven’t conducted detailed research into what percentages of the garbage patch come from which source. A 2014 study sampled 1571 locations from a range of garbage patches, not just the Great Pacific one, and it concluded that more than 60% of the waste is made up of buoys, lines and nets from fishing ships. Though the study researched over 1000 locations, this report can’t be considered comprehensive. For example, in 2011 the EPA published a contradictory report that concluded that the majority of the Great Pacific garbage patch is made up of domestic trash and manufactured products. This report also stated that the source of the trash comes from the land, via marinas, ports, rivers, storm drains and other sources.

Humans have known about the the Great pacific garbage patch since 1988. However, its scale wasn’t’ first comprehended, and it has grown since. The first person to inform the world of its true scale was an oceanographer and race boat captain named Charles J. Moore, who encountered it personally when taking part in the Transpacific Yacht Race.

Though it’s huge and causing extreme damage to the environment, the Great Pacific garbage patch isn’t easily visible from the surface. The exceptionally small pieces of broken down plastic are nearly invisible to the eye. There are ways of estimating just how much plastic has been wasted, though. One of the most recent studies confidently predicted that over half of the world’s plastic produced since 1950 is now in the oceans. From 1950 to now, humanity has produced 9.1 billion tons of plastic. 7 billion tons of this are no longer being used. Only 9% of this discarded plastic got recycled and 12% got incinerated. Therefore, 5.5 billion tons went into the oceans or land.

One of the worst effects of marine debris is “ghost fishing,” which is when discarded nets end up catching and suffocating other marine life. Marine garbage patches can also prevent algae and plankton from receiving enough sunlight to create nutrients. Algae and plankton use photosynthesis to make nutrients, so when a garbage patch blocks the sun the entire food chain is threatened. Another way that plastic is poisoning the world’s oceans, is that the plastics that are degradable leave a range of toxic chemicals in the water, damaging marine life, which includes the fish that we eat.

Additionally, small pieces of non-degradable plastic have already been discovered in the stomachs of sea creatures, such as turtles and albatrosses. In a study of albatrosses in Hawaii, biologists discovered that one third of albatross chicks are dying because their parents are inadvertently feeding them plastic from the ocean. To date, research has documented 267 global species that are harmed by ocean plastic pollution. However, the true number of affected animals is definitely much higher and continues to grow.

If you’re wondering how the ocean’s plastic will end up in humans, there is already one well documented pathway. The food chain goes like this: jellyfish often accidentally eat plastic pieces, fish eat the contaminated jellyfish and humans eat the plastic filled fish. This problem is only going to get worse The UN ocean conference predicted that the ocean will contain more plastic than fish by 2050. 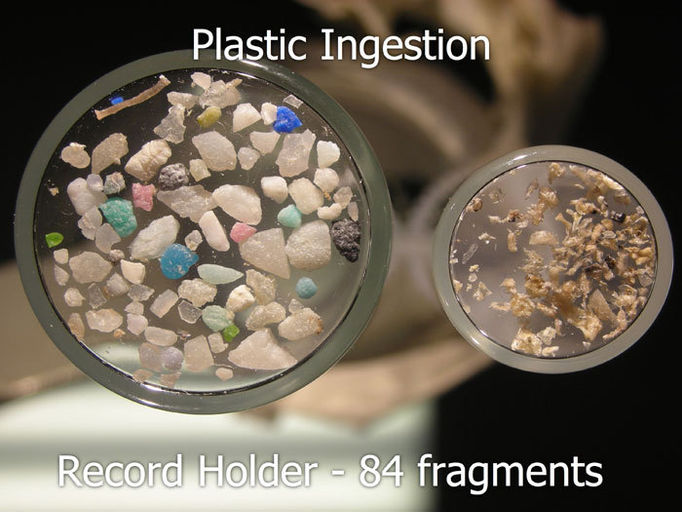 While many organizations are committed to prevent the patch from growing, being aware of and lowering your plastic usage would help a lot.