Death. It’s not funny, unless you decide it is. While most people settle for somber reminders of their former existence after they die, others decide to go down another route: funny epitaphs.

This trend in funny messages on headstones isn’t exactly new to the world, but it has increased in recent years. You’re more likely than ever before to see a funny message written on a granite block above a dead person than any other time in history.

If that has convinced you to write something hilarious on your grave, but you’re stuck for ideas of what exactly, then here are some fine examples from the world of dead people:

This person clearly had a lust for life. Esther must also be commended on how he was able to maximize the impact of his message with very little space.

Edith’s message is as true today as it was when it was written. It’s also great to see a liberal use of profanity on a monument.

This one is eerie, bringing to light images of the person being buried alive. Hopefully this didn’t happen, and we can all chuckle safely.

This one wins bonus points for being weird. It must have been hilarious to have seen Paul’s family when the will was read out “It must be in the shape of a gingerbread man’s face, which says ‘life sucks, then you die… ‘ on the eyes and mouth. Also, write that I lived from present-eternity.” We’re glad the family had the guts to carry out the bizarre request.

This is one that shows that humorous messages on gravestones are nothing new. Even way back in 1930, Joel Dermid was determined to make those who paid their respects laugh at this final message.

A quick Google search of who Robert Clay Allison was reveals that the message on his grave isn’t entirely true. Also, this sign was added at some point after 1975, so Allison really had no say over the epitaph.

Another potent post mortem memo. Sorry for disturbing you, Joan.

A more succinct version of No.2. Perhaps James didn’t want a curse word written on his grave for all eternity?

It appears that this person went to the grave anonymously, probably due to the shame of failing in his deal.

In case you’re wondering, yes this really is Dee Dee Ramone’s grave. He was as witty in death as he was in life, it seems.

Surely this should have been written in the past tense? Well, if this person wanted present tense, then there’s nothing we could have done to stop him. 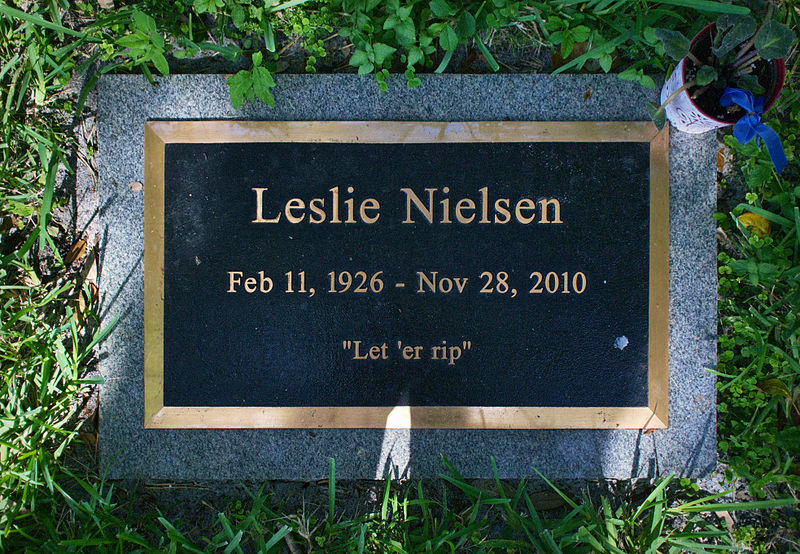 If you’re confused by this message, let’s elaborate. Leslie Nielsen’s favorite practical joke was to make it seem like people had farted with a hand controlled fart machine. He was so proud of this joke, that he inscribed it on his grave.

What could be more fitting for the television personality than this? He still lives on in reruns.

He was hoping for a pyramid, but he didn’t bother to inscribe his name? What a strange person.

A sad truth of life. Presumably this isn’t the famous George W. Jr, who is still alive.

A handy recipe for all who see it. Perhaps something creepy happens if this recipe is followed, like Kay’s ghost haunts you?