It’s hard to imagine a more ‘90s movie than The Mask. It came out in the middle of the decade, starred two giants of ‘90s cinema and had the most ‘90s style logo of all time.

Most people that grew up in the ‘90s have watched The Mask many many times. However, there are a range of interesting things about the movie that you may not be aware of. Did you know any of the following facts?

1. The special effects team saved a lot of money and time, because Jim Carrey’s natural body movements were so cartoonish, that most of the time they didn’t need to digitally enhance them.

2. The oversized teeth the Mask wears were only meant to be used in scenes without speech. But Carrey learned to talk while wearing them, which only enhanced the character’s wackiness.

3. The Mask’s yellow suit was based on an outfit that Jim Carrey’s mother made for him when he first tried to perform stand up comedy.

4. Jim Carrey stated that what attracted him to the role of Stanley Ipkiss was the character’s love of cartoons. Carrey is a huge cartoon fan himself.

5. Many actors were considered for the role of Stanley Ipkiss, including Matthew Broderick, Steve Martin, Rick Moranis and Martin Short. But it’s hard to imagine anyone else but Carrey in the film.

6. Anna Nicole Smith was initially suggested for the role of Tina Carlyle, but it ultimately went to Cameron Diaz, who was discovered while leaving a modeling agency and had no acting credits at the time.

7. It wasn’t easy for Cameron Diaz to get the role, however. Due to her inexperience, she auditioned 12 times and only got cast one week before the movie started shooting.

8. Richard Gere was considered for the role of Lt. Mitch Kellaway, the police detective that hunts the Mask throughout the movie.

9. Carrey purportedly earned $450,000 for The Mask, since the deal was signed before Ace Ventura: Pet Detective became a hit. After the success of both films, Carrey was reportedly paid $7 million for Dumb and Dumber.

10. Ace Ventura: Pet Detective, The Mask and Dumb and Dumber were all released in 1994.

11. The Mask had its own spin-off animated TV series. If you were a child in the 90s, you probably already knew this, but did you know that the show only lasted for three seasons, with 54 episodes in total? It may seem like there were more, as it was repeated constantly.

12. The movie was nominated for the Best Visual Effects Oscar but lost to Forrest Gump?

13. A very dark early idea for the movie was to make it about a mask maker that takes the faces from dead bodies and then puts them on teens to transform them into zombies. 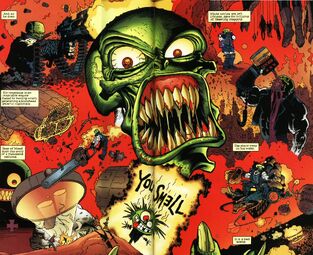 14. Although you may not think it, The Mask is considered a superhero movie. In fact, it became the second highest grossing superhero movie of all time shortly after its release.

15. Mike Richardson, the writer of the original The Mask comics, has said that there may be another sequel to The Mask in the future.