Have you heard of nudibranchs, the colorful jelly-like molluscs that live on the bottom of the ocean?

Nudibranchs are soft-bodied marine gastropod mollusks, but they ditch their shells during the larval stage and never grow them back. Their colors and shapes are so varied, it can be hard to realize that you’re looking at the same animals when seeing multiple species. Divers that have seen Nudibranchs in the ocean have described them a looking like glinting diamonds in the rough.

They’re part of the sea slug family and display some wild colors and patterns. A nudibranch’s colors are derived from the food it eats. They’re carnivores that eat other creatures like sponges, anemones, and even other nudibranchs. One species even eats the Portuguese man o’ war. To find prey, they use 2 tentacles, called rhinophores, located on top of their head. In addition to color, nudibranchs can even retain their prey’s poison and secrete it themselves. They evolved their crazy colors due to an evolutionary means of camouflaging themselves from large predators and warning the predators of their toxicity. However, in some places the nudibranch is found, this defense mechanism can backfire and make it extremely noticeable and edible looking. 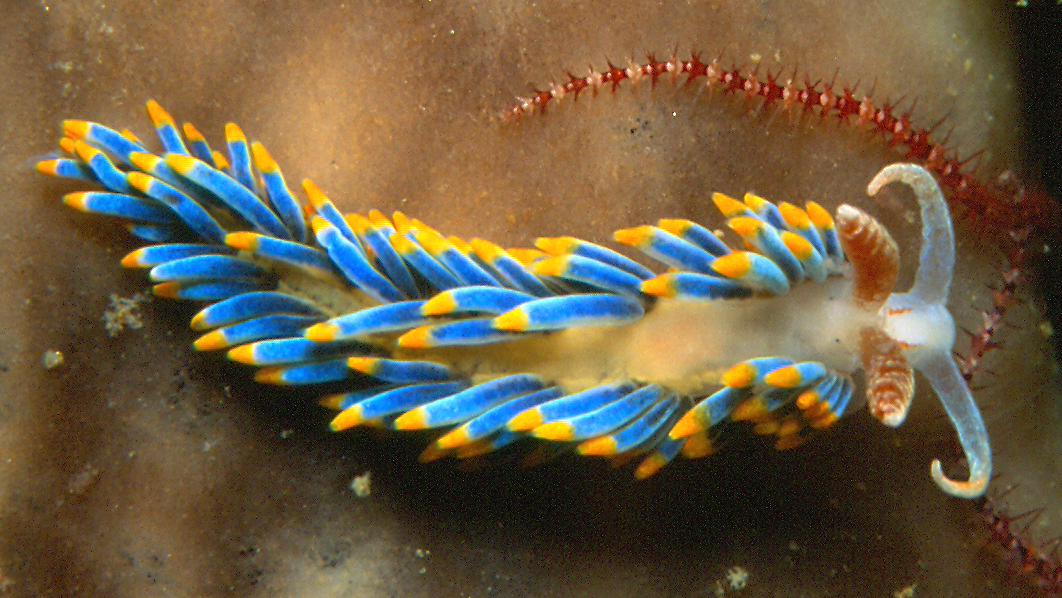 There are over 2,000 known species of nudibranchs, but the true number may never be known, as new ones are identified almost daily. They’re found worldwide and at any depth of salt water but are most often found in warm shallow reefs. Most known species crawl along the seafloor; one species that doesn’t stick to the floor floats upside down at the ocean’s surface; and two species are known to swim.

They come in many shapes and sizes and can grow between 0.16 to 23 inches long. Nudibranchs are hermaphrodites that can mate with any other mature member of their species. However, they cannot impregnate their own eggs, so need to find another to breed with. Seeing as they are also cannibals, it must be difficult to work out whether another nudibranch wants sex or food.

Biologists have noted that some species of Nudibranchs make sounds that humans can hear. This sound is really weird and has been described as like a steel wire hitting a jar when it’s out of water, and like the ticking of a clock when it’s in water. They make this noise when they’re moving about a lot or are stroked and never make this noise when they’re cold or still. It isn’t known if these sounds are a defense mechanism, a way of communication or something else.

Unfortunately, these beautiful creatures don’t usually live longer than one year.Good thing there’s so many of them.

If you think the name nudibranch sounds, odd, that’s understandable. The “nudi” part of their name comes from the Latin word for naked “nudus,” and “branch” comes from the Greek word for gills, “brankhia.” Unusually, the pronunciation of the name ends with a “k” sound, so if you ever mention them in conversation, remember to say it like “noody-brank”