Have you heard of lampreys, the jawless parasitic creature that drains the blood of its prey?

Their long bodies and lack of scales make them look like eels. But lampreys are actually fish. Their full length varies hugely. The smallest species are around 5 inches long, while the longest are around 40 inches.

Its greatest weapon is its suction cup mouth lined with sharp teeth. The lamprey’s teeth hook onto its prey. It then grates its tongue against the fish to remove its skin so it can feed on its blood and body fluids. Studies have shown that lampreys also feast on all parts of a fish, from scales to flesh to bone. A single lamprey kills about 40 pounds of fish every year.

It also uses its mouth like an Uber Pool. They often attach to larger, faster animals to move from one place to the next rapidly. This and the way that their bodies are shaped make them incredibly energy efficient animals. When they do swim on their own, they move in a manner that makes the water pull their bodies, instead of pushing through the water themselves.

But do they feast on humans? Yes, sometimes. People have been attacked on numerous occasions, but biologists believe that they only do this out of desperation, when they’re starving. Usually, humans are too large and intimidating for them to attack. Perhaps the worst ever account of lampreys eating humans comes from Roman times. A Roman nobleman named Vedius Pollio used lampreys like a bond villain uses sharks. He kept a pool full of hungry lampreys, and when one of his slaves displeased him, he would push them into the water to be devoured.

There is evidence that in the present day they’re affecting humans in a bad way, though. In the Great Lakes, biologists are worried that their toxic mucus is contaminating the drinking water. Additionally, as they have no natural predator in the Great Lakes, they are running rampant, attacking many fish that humans eat, like trout. Humans are trying to control these Great Lakes lampreys with lampricide poison. New methods are currently being devised.

Yes, we said Great Lakes above. They live in the USA, and in most other places in the world that don’t have a tropical climate.

Despite their disgusting appearance, people eat them. In fact, some people prefer them to normal fish, as they taste more meaty. In fact, back in middle ages, lampreys were prized as a delicacy and only eaten by the richest people. King Henry I supposedly even loved eating them so much that they killed him, due to the fact that he wouldn’t balance his diet. Even in more recent times, royal families have feasted on them. For example, for the coronation of Queen Elizabeth II, also known as the current queen, one of the main dishes served to guests was lamprey pie. In Portugal, Spain, France, Finland and Latvia lamprey meat is still considered a delicacy.

They’re also over 350 million years old, which means they’re doing something right. Lamprey skeletons are made of cartilage, like sharks. And they breathe through a row of 7 pairs of gill openings behind their mouth and eyes. Despite what it looks like, they have backbones. In fact, scientists think that they are perhaps the first animals to ever grow a backbone, meaning that thanks to these guys, we evolved to not always be flopping around like crazy. There are also some really weird biological quirks that lampreys have, that evolutionarily they shouldn’t. For example, their immune systems are really complex for what they are, and they have the most chromosomes of any vertebrae. 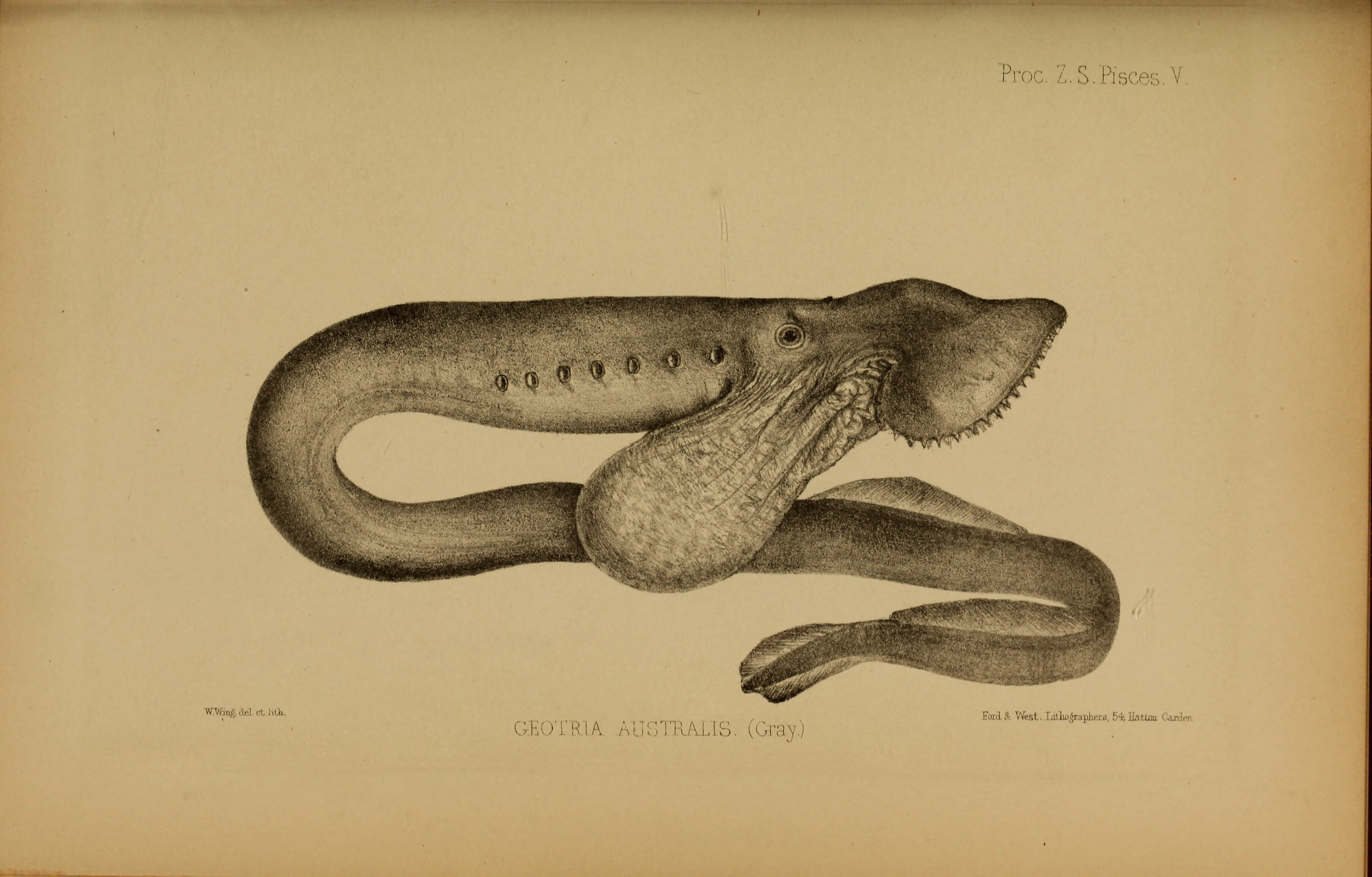 Some lampreys have something very unfortunate looking dangling just below their faces: ballsacks. The pouched lamprey is the only species with this unfortunate characteristic. Biologists just can’t work out what this ballsack like facial feature is for. It’s only found on the males, but it definitely isn’t a ballsack. Some speculate that it is used for gathering stones to make a nest for their children, but this has not been observed ever. The pouched lamprey is only found in the southern hemisphere and lives in both fresh and sea water. On a touching endnote for the many teethed, ballsack dangling, pouched lamprey, biologists have observed them clinging onto their eggs for over 100 days. This is to ensure that their babies grow up safe and is their final act in life. If you’d like to see this particular type of lamprey, you may have to travel far. They’re only found in the southern hemisphere, in Chile, Argentina, New Zealand and Australia.