The Rubik’s Cube has been a fixture in people’s lives for decades. It’s both a strong symbol of ‘80s culture and something that kids and adults still like to play with in the present day. Like Lego, the Rubik’s Cube is timeless, appeals across the world and has occupied countless spare hours.

While some people love Rubik’s Cubes and others get extremely frustrated by them, there’s no denying that the Rubik’s Cube has impacted the world in a way few toys do. As you may imagine for such an appealing and popular toy, there are many interesting facts about it.

Here are some things about the Rubik’s Cube that you may not have known:

The Rubik’s Cube was created by Ernő Rubik, a Hungarian sculptor and professor of architecture, in 1974. He wanted to create an “apparently impossible object.” So impossible, in fact, that it took Rubik himself over a month to solve it the first time round.

When Rubik invented his Cube, he wasn’t even intending it to be a toy. He only noticed its appealing puzzling quality when he was first trying to solve it.

It was originally called “Magic Cube,” and from 1977, it was only available in Budapest. However, strong sales and promotion in a Nuremberg toy fair led to international distributors wanting to license the toy. 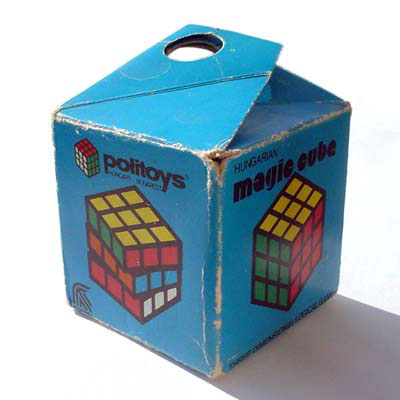 In 1980, the toy’s international distributor, Ideal Toy Corp, changed the name to “Rubik’s Cube,” in the fear of it sounding “too witchy.” Before settling on “Rubik’s Cube”, the distributor also considered naming it “The Gordian Knot” and “Inca Gold.”

It has become the best selling toy in the world, with over 350 million purchases.

It even won the top toy awards in the UK, France, Germany and the US in 1980.

The Rubik’s Cube was featured on the cover of Scientific American in 1981.

Image Source: We Are The mutants

Many instructional books on how to solve the Cube were written during its initial craze. In fact, three of the best selling books in America in 1981 were about solving the Rubik’s Cube, including the top selling book The Simple Solution To Rubik’s Cube by James G. Nourse. This 64 page book sold 6,680,000 copies in its first year.

For many years, the largest Rubik’s Cube of all time stood at ten feet high and was constructed for the 1982 Knoxville World’s Fair. However, a 26 feet high version was revealed at Burning Man in 2011.

There was even a cartoon show about the toy called Rubik, the Amazing Cube. This show starred a magic Rubik’s Cube called Rubik. He could fly and had many superhero powers. However, he only came to life when his puzzle was solved. 13 episodes were made.

The 26 miniature cubes that make up the apparatus are called cubies or cubelets.

The Rubik’s Cube also has an international governing body, The World Cube Association. Since 2003, it has been organizing worldwide competitions and keeping world records.

The Rubik’s Cube has even inspired its own sport: speedcubing. As you may guess from the name, speedcubers attempt to solve Rubik’s Cubes and other similar toys as fast as possible. The first speedcubing championship took place in 1981 in Munich.

The World Cube Association also hosts events where cubes are solved in more challenging ways. These include blindfolded solving, single handed solving and feet only solving.

The current world record for solving a Rubik’s Cube is 4.59 Seconds. South Korean SeungBeom Cho set this record on 28th October 2017 in an event held in Chicago Illinois. He was 18 years old at the time.

The world record for one handed Rubik’s Cube solving is 6.88 seconds. Australian Feliks Zemdegs set this record in 2017 in Malaysia.

The world record for feet only Rubik’s Cube solving is 20.57 seconds. Polish Jakub Kipa set this record in 2015 at an event in Poland.

However, robots have already beaten humans to the record of fastest Rubik’s Cube solving time. A robot called Sub1 solved one in 0.887 seconds.

In later years, Erno Rubik invented other puzzles, including the Rubik’s Snake. More recently, he founded a range of organizations that aim to get more young people into science, math and problem solving careers, by using his puzzles as a starting point. These organizations are called Beyond Rubik’s Cube, the Rubik Learning Initiative and the Judit Polgar Foundation.

Can you solve a Rubik’s Cube?